Middle-school student Brian Reilly says he can’t play basketball on Leland Road when the strobing effect from the Kingston Wind Independence (KWI) Turbine’s shadow flicker is at full throttle. “I get a wicked bad headache so I have to go inside,” Brian told the Journal as he stood on the front steps of his neighbors house.

Dan Alves, also a resident of Leland Road, refuses to allow his epileptic son to stay in his bedroom when the KWI Turbine’s shadow flicker penetrates into his house. “That’s pretty much the rule,” Alves told the Journal on Friday afternoon. “We don’t want him in his room but we’re not always home so we can’t control it.”

Struan organised and co-hosted the first National Anti-Wind Conference in Welshpool, along with Glyn Davies MP and Chris Heaton-Harris MP.

He is the seafaring mascot inviting children on an environmental journey exploring the impacts of climate change.

But the brightly coloured barnacle has whipped up a storm among campaigners and politicians weighing up the benefits of a controversial offshore wind park off the Hampshire and Dorset coast.

END_OF_DOCUMENT_TOKEN_TO_BE_REPLACED

Real Environmentalists, Propaganda from Two Continents, and a Plea for Critical Thinking 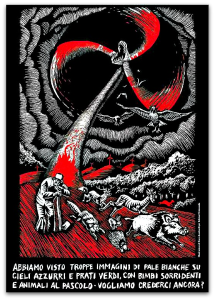 As we continue the fight to preserve Lenox Mountain against the development plans of the pro-wind-power forces, it becomes increasingly clear that the battle will be waged not only on the local front – with the Lenox BOS – but also at the State level – as the threat of passage of WESRA looms on the horizon. And as we continue to read about industrial wind turbines – about destruction, dirty politics, big money, and bad decisions, about friends and neighbors torn apart on the issue of whether or not turbines are green, and about former environmentalist allies abandoning “Think Globally, Act Locally” to, instead, hurl the NIMBY epithet at wind protestors – we encourage you to continue to do the same. The posted article “Who’s the Real Environmentalist?” explores the developing rift between the compromisers and those who steadfastly hold to their ideals.

On another note, we came across two interesting posters from two different continents – each poster eerily echoing the other. For many years now, the big PR firms hired by Big Wind have been producing tens of millions of dollars worth of commercials filled with sunlight and smiles and green fields in the shadow of lazy wind turbines – all of this time, money, and energy bent upon turning 425-foot mechanical monsters into a symbol of green progress. The term that comes to mind is propaganda – the creators of the two posters clearly see it that way too.

Proposed Wind farm in Douglas Mass – developers are saying wind power is clean and quiet and safe, even at the proposed 1000 ft setbacks. Residents nearby to other wind farms say otherwise, in fact are audible at over 1 mile away. In the event of a turbine failure, blades can fly over 4500 ft in any direction. There seems to be more to the story than just clean and quiet energy. There have been over 730 wind turbine accidents in the past 10 years, resulting in some 40 deaths. Do you want wind turbines in YOUR back yard?