Additionally we’ve been sent some photos from the demonstration. Well done Cornwall Protect and all those who went along.

END_OF_DOCUMENT_TOKEN_TO_BE_REPLACED

In a bid to give a voice to the thousands of people who suffer in their health from the vicinity to wind turbines, the North American Platform Against Wind Power (NA-PAW) presents to the public twelve-year-old Jordynn Stom, whose already delicate health is being threatened by a wind farm project. 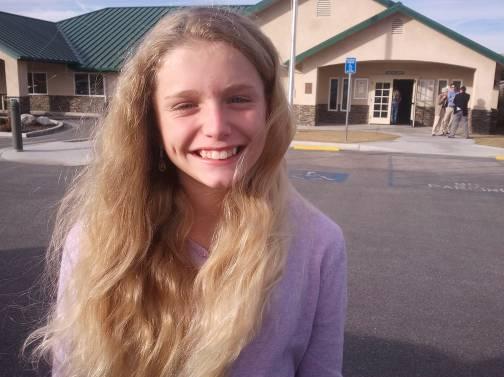 Jordy will no longer be able to enjoy a normal family life on her parent’s ranch in Kern County, California, where plans are afoot for the construction of an array of wind machines in the vicinity. She is one of the many American children who suffer from disabilities. Her immune system is deficient, and she has Systemic Lupus and Photo-Sensitive Epilepsy. Last Christmas, she had a seizure when camera flashes bombarded Santa at a public event.

So concerned is Jordy, that she has volunteered to become the “NA-PAW’s ambassador of good will”, says Sherri Lange, chief executive officer of NA-PAW. “Jordy has good communication skills, and will be travelling around North America delivering speeches, teaching out to other disabled children threatened by wind farms, and to their families.”

Despite her medical condition, she attends school and is a straight A student; she surfs, kayaks, rides her motorcycle, hikes, cooks, and writes short stories. But she knows, and her parents know, that a wind farm may soon cause havoc with her life, as her disabilities will make her especially vulnerable to the turbines’ infrasound and shadow flicker. “In Canada, there are over 565,000 disabled children” says Lange. “In the U.S. one in every 12 children is disabled. They are all protected by the United Nations’ Convention for the Rights of Persons with Disabilities (UNCRPD) and Convention on the Rights of the Child (UNCRC), to which both Canada and the U.S. are parties. This is something that has been entirely overlooked by developers and governments, and wind farms have caused the health of a number of them to get worse.”

Dr Robert McMurtry, Order of Canada, Canada’s highest civilian award, former Special Advisor to the Romanow Commission on the Future of Health Care in Canada, and Professor Emeritus, University of Western Ontario, is often sought out as an expert. He wrote to NA-PAW recently that, “Sadly I can confirm the reality of Jordy’s vulnerability as many parents and grand-parents have communicated the details of their children’s adverse health effects. They have reported nose-bleeds, sleep disturbances and regression in development of their children and grand-children. One particularly disturbing case involved an eight-year-old blind boy Jason whose hearing by necessity is very acute. He simply cannot bear to be within 2 kilometres of industrial wind turbines which are slated to be erected 800 meters from his home.”

The Platform thinks that the plight of these invisible children, as the UNESCO calls them, can no longer be ignored. “Turbine developers, planning departments, municipal, local, state, provincial and federal governments ARE responsible, and these children and their families will exercise their legal rights”, warns Lange. “Non-compliance with the UN Conventions can no longer be ignored, nor tolerated. A dialogue with the government on this issue has become urgent.”
CONTACT: Sherri Lange
CEO NA-PAW North American Platform Against Wind Power
416-567-5115
CONTACT: Meredith McCalmont (parent of Jordynn Stom) 1-714-351-7848 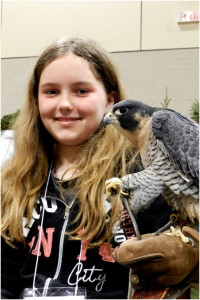 My name is Brenna. I am twelve years old. This is me at the Sportsman’s Show ( as a volunteer for the Peregrine Foundation) with a favorite Peregrine Falcon. He was rescued, and now helps my family to educate others about raptors and wildlife, and the dangers of industrial wind turbines and their effects on wildlife.

My name is Brenna Anne Gibson. I am 12 years old and attend Walsh Public School in Ontario. On January 5 of this year, Nextera Energy (a foreign based wind turbine company) cut down an active Bald Eagle nest in Haldimand County. They were given a permit to do so by the MNR the evening before, on January 4 after 5pm, leaving no time for public comment or review.

We the undersigned demand an explanation as to why a “species of special concern” was not spared from the interests of big business and our provincial government.

Written by Will Clark

Head teachers are being asked to venture out into hurricane-force conditions to switch off wind turbines in school playgrounds.

That is one of the claims of far north anti-wind farm protesters who have heavily criticised Highland Council’s safety review of school-based turbines.

This week, after releasing its own report, Caithness Windfarm Information Forum (CWIF) is calling on the playground turbines to be removed pending an independent assessment of the risks they pose.