A North Lincolnshire windfarm plan has been rejected because of the “serious effect” it would have on eight-year-old autistic twin boys living nearby.

Anita and Trevor Glathorne, whose Burton upon Stather home is already overlooked by one windfarm, said the rotating blades affected their sons.

The planning inspectorate dismissed the appeal solely because of the impact the farm would have on Lewis and Ross.

Developer Ridge Wind said it was disappointed with the decision.

The developers appealed to the planning inspectorate after North Lincolnshire Council rejected the application for the Grange windfarm last year.

It would have overlooked the front of the Glathornes’ house, so they campaigned to have the application refused because they said it would harm their sons who both have autistic spectrum disorder.

A Lincolnshire family with an autistic son said plans for wind turbines near their home had prompted them to move to another county.    The Robinsons used to live in Owmby by Spital where a farmer has applied to put up three turbines on nearby land.

Steven Robinson, 11, has autism and his family claim noise from the facility, or others which could also be built, would cause him distress.

The landowners insist the turbines would not be audible to homes.   They say the power they would generate is vital for their business.

Steven’s father Derek Robinson said they had moved to Leicestershire for the sake of their son’s health.   ”It would make him a prisoner in his own home, he would have to spend all the time inside.   The noise – it would be like listening to a jumbo jet, the sound would terrify him to the point he could not go outside.”

He added that even if the current application was turned down, he felt it was only a matter of time before more turbines were built.

Fears over children’s safety have been raised after the blade of a wind turbine similar to ones installed at Highland schools was thrown 60 yards by wind.

The turbine in Caithness started to break up as it was hit by a gust, and parents believe that pupils could be seriously injured, or even killed, if the incident is repeated at one of the 13 primary and secondary schools across the region that have their own turbines.

Brenda Herrick, the chairwoman of Castletown community council, has a grandson at Castletown Primary in Thurso. She said yesterday that she was worried in case a blade from the turbine at the school hit one of the children.

“I was already extremely concerned, but this shows just how dangerous they can be,” she said. “We keep being told they are safe, but no one can guarantee that and I don’t want one of these blades flying into my grandson or any other child.”

Highland Council shut down its turbines after a risk assessment recommended extra safety measures, including putting fences around them. Mrs Herrick, 72, said, however, that the barriers would do nothing to protect children from flying debris.

“Children aren’t allowed to play conkers in school for health and safety reasons, but it seems it’s OK to put dangerous machines in their playgrounds — it makes no sense at all.”

Stuart Young, chairman of Caithness wind farm information forum, said that a witness had seen a piece of debris from the blades of the Scrabster Hill turbine near Thurso land about 60 yards away from the mast after it was hit by a 40mph gust.

The 85ft structure is on farmland and only a couple of hundred yards from A836 Tongue-Thurso road. Mr Young said: “Highland Council steadfastly refuses to acknowledge any risk from siting small wind turbines in school playgrounds.”

He said that turbines could fail in wind speeds far less violent than those that manufacturers said they could withstand. Mr Young said: “Failures are usually caused by human error, but it is humans who order the installations, and install and maintain them. Surely now Highland Council will take notice and remove wind turbines from school playgrounds.”

A Highland Council spokesman said: “The council is satisfied that we have put in place the required risk assessments of wind turbines in schools to ensure their safe operation.”

Councillor Donny Kerr, who represents Inverness Central and has previously raised concerns about turbines in playgrounds, said that he was still wary of them. “I would be surprised if this sort of damage was done by a 40mph gust,” he said. “However, anything mechanical is prone to faults.”

The damaged turbine in Caithness is owned by John Henderson, of Scrabster Farm. He could not be contacted for comment yesterday.
A turbine at Raasay Primary, on the Isle of Skye, was removed after it broke up in 2009.

Look at the presentation about Vibro Acoustic Disease by Mariana Alves-Rereira, PhD. The presentation was shown during the NHMRC Wind Turbines and Human Health Scientific Forum on July, 7th 2011.
Dr. Alves-Pereira is investigating the influence of low frequency noise and health effects over decades. She and her team found out a relationship between low frequency noise and serious health problems. 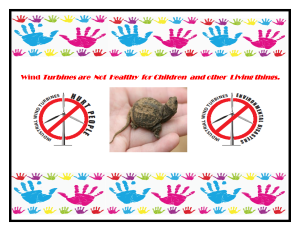 In Ontario renewable energy projects fueled by wind are being operated, constructed and installed across the province without the consent of many communities and residents. Using the wind to power turbines to generate electricity these green energy power generating projects are impacting communities, creating division and increasing reports of harmful health impacts.

Join the mothers, grandmothers, children and their families on their walk to deliver a message to the Province and the developers that they and their communities are not willing hosts to these machines. Consent has not been given to being exposed against their will to wind turbine emissions.

Come in peace and respect and all will be welcomed.

Where:     800 Cheapside Road in Haldimand County

GLENMORE, WI –A battle over the effects of wind energy are blowing into Brown County again. Several families who live near the turbines believe it is causing them health problems.